When I was about a year old, my mother was shopping in the PX on the base in Cherry Point, NC where my father was stationed. She purchased a pound of ham from the deli. By the time she reached the check out, I had eaten the entire pound of lunch meat. There were no scan labels in those days. She told the cashier to weigh me on the scale and deduct a pound from my given weight for price purposes.

On Easter Sunday’s, it was a tradition, for my sister and I,  to wear our mother’s Easter hat and high heels to have our picture taken in front of our house. She was so proud of us. I could feel it. My brother, her little man, dressed in a suit complete with bow tie and suspenders would pose perfectly with his Easter basket.

A few days before each Mother’s Day, our Dad would purchase hundreds of flowering plants. We were recruited to assist in planting the flowers all around the house and in the planters. I say, recruited, but we were useless participants. The display was always lovely, large and ostentatious. Dad would spend most of the time deciding on color coordination and keeping us from crushing and maiming the blooms. Mau would act like she had no idea what was going on outside even though the noise was at kamikaze aircraft levels. Always the humorist, Dad would keep telling us to cut out the grab ass and laugh every time a pallet of exotic color exploded on the driveway. When the gazillion flowers were strategically in place, all the walkways were hosed off and the containers discarded, we were finally told to go in the house and tell Mau there was a huge surprise for her outside! Of course, she would act extremely surprised and ohh and ahh at every turn of the property. My brother, sister and I were the recipients of the greatest gift for receiving the memory.

Christmas was surreal and magical because of our mother. She set the expectations higher than possible and worked diligently to make it happen. We poured pounds of sugar all over the kitchen baking cookies. There were always multiple Christmas trees to be glorified in the house. The lights on the evergreens outside were something like Chevy Chase’s Christmas Vacation. We were then decorated, stuffed into snowsuits and hauled all over Pittsburgh to children’s holiday events, photos with Santa, church and Sunday School programs and visits with friends and relatives.The happening of Santa’s delivery always included every whim, wish and want a child of the world could ever think of. I always wondered how she fit in the hair appointment at the beauty salon to get all of her hair methodically formed into “french curls”. As an adult looking back, each holiday was perfection with laughter and chaos.

I remember Mau proudly telling everyone her favorite gift was a scrap of foil wrapping paper my three year old brother had given her. He told her he wanted her to have something pretty.

During my 7th Christmas, I was bothered because a neighbor friend of mine did not receive a gift during the party gift exchange at school. I later learned it was because she did not have a gift to share. She was one of nine children, wore tennis shoes in the snow and her coat was a thin windbreaker jacket. Winters were rugged in Pennsylvania and her hike to school was farther than mine. My mother, not wanting to have a second of unhappiness shroud my soul, bought, wrapped and created magic for my little friend. To this day, I remember Arlene’s shaking hands as she accepted and unwrapped the present. The joy in that moment superseded all of the other glitter. The memory of my mother’s compassion for me and Arlene was insurmountable.

Summer camp was always an arduous event for me. Now, I know why it was important to have my silly ass thrown out into a world different than Pleasant Hills, PA. At the time it appeared to be an escapade of campfire smoke, food I wouldn’t like and a panic over a Snicker bar shortage. I went to a camp in Angola, NY. Geez, that was out of state! How far would my mother go to get rid of me? – was what went through my mind! The traditional breakfast before camp drop off was always corn fritters smothered in powdered sugar and all the other brunch accoutrements. I would whine with worry over losing my spending money. What if my parents forgot to pick me up? I don’t know those people at camp, etc. Mau would offer the usual reassurances. One week did not equal a million years. There were enough new clothes and toothbrushes in my bags to supply every camp participant. Camp did not serve poison in the mess hall. My exit was with trepidation. The return was always, as she said, one of the best memories of my life.

There was only a handful of times I witnessed my mother crying. When she was in her mid twenties, her best and lifelong friend, Nira, died, leaving five tiny children. Mau took us to a South Park picnic pavilion, which held a lot of joyous memories. While I entertained my younger siblings, my mother cried her grief stricken heart out. I didn’t know how to make it better. She cried after my little girl was killed in a car accident. My crying made her cry even more. One time, she cried when we were at the airport in Pittsburgh when I was returning home to Houston. I was taken aback because she was always such a brave soldier. She cried when my father died. She cried when my husband died. She wasn’t a fan of my husband. She cried because my heart was broken. It was extremely uncommon. A strong woman in every respect. I would boohoo if I yelled at my kids and hurt their feelings for breaking something or each other.

Her laughter rings in my ears when I remember her and my sister wrestling over the last serving of “second day spaghetti”. She roared with laughter trying to get out of the back seat of my college boyfriends Mustang at Tastee Freeze. She didn’t laugh too much when my Aunt was stuffing chicken into her purse at Johnny Garneau’s Buffet and my father wrote, “Watch the chicken on the left disappear” on the linen napkin for me to read out loud at the table! She laughed later at the outcome, not the act. My father’s crazy antics and stories always brought uproarious laughter out of her. He worked hard at making simple moments into revolutionary amusing elements. After dinner, he would lay in the middle of the hall floor where we would all have to walk around him,  while my mother would bark orders for us to clear the table and load the dishwasher. It was the same clamorous routine every night. We were all exercising our “outside voices” in the dining room and Dad would say, “I’m going home if this noise keeps up.” She would poke him with her foot and tell him, “Fool, you are home and you’re stuck with us.”  They were made for each other.

This is my first Mother’s Day without my mother. She died last October and my heart is broken missing her. You always need your mother, no matter how old you are. I miss her guidance, comfort and insane opinions. I still have her all encompassing love around me. Being a mother, myself, the most poignant thing you can share – is yourself. It all goes so fast.

I love you, Mau, even though you yelled at me for standing on the headboard of my bed to reach the window to talk to my boyfriend in the drivewayxxxxxxxxxxxxxxxxxxxxxxxxx 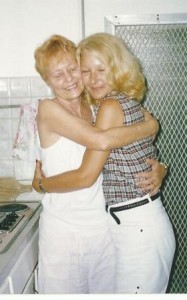