The most intelligent dogs I’ve had the privilege of living with have been mixed breed rescue dogs. This is not to say that the pedigreed dogs were stupid. It is a comparative observation. It doesn’t lessen the love. The mixed breed dogs were quick to learn commands and would do anything to please. There were a lot less health issues as well as being a lot less maintenance. Rescue dogs are capable of having as much high heart value as an expensive, paper’d, pedigreed dog.
The CockaDocker and Beagle-Basset were not the dogs mustering attention during long walks. The Dachshund and Cocker Spaniel were always the relatable dogs. “Oh, we had a dog just like that.” The Cockapoo was always mistaken to be a Terrier and the CockaDocker was always thought to be a baby Lab, Most of the time, there were multiple dogs in our household. When one dog garners attention, it was as if to say, one child is beautiful and the other two are homely! Just like a jury of your peers, we did work hard at creating personality for the quiet puppy or the one with an “up front” personality.
Texi, our Beagle-Basset was a notorious bitch, to say the least. At the time, she was the lone female with two male cohorts. She was amicable and well behaved but did like laying on her duck rug in the corner of the breakfast room. I made her a red lace dress out of fabric printed with a young Elvis Presley on it, for Halloween. This was almost an exercise of desperation to liven this young lady up. Believe me, with an active young family and a couple of jobs, I was lucky to pluck an eyebrow let alone make a dog dress! Femininity blossomed from her spirit when I gave her a middle name, Texi Anne. A resident Diva Dog with a bark like a Basset Hound was akin to an unattractive, diamond decorated aunt who always brought candy but bitched about the entrée served for dinner. This precious rescue dog ended up being a savior when someone, uninvited, entered our home. Texi Anne took a mega bite out of the intruder. She came to us, on ‘Go Texan Day” from a friend who witnessed Texi being thrown from a car on FM 1960 in Houston, Texas, one sleety, rainy night. We had her for 12 years. She is still missed. 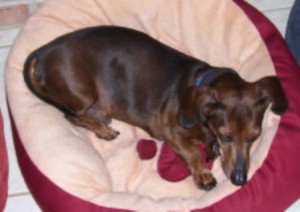 Harley, a pure bred mini Dachshund, was delivered to our door by a neighbor. He was a puppy, as big as my hand. This dog had been bred to be sold, as in money making profit product. We were the last chance to take him because the families he had previously been sold to brought him back because he kept crying. Being the runt, the breeder family didn’t want to deal with him. Mr. Runt was obviously cutting into the bottom line. It was either we take him or he was going to the pound.
Harley possessed an uncanny and comical personality. He’d do laps in the bathtub and take the king size comforter off of our bed and drag it through the house. His legs were exactly one inch long and at his heaviest, he weighed 10 pounds. Har was an alpha dog with the management style of a Harvard Business School graduate. If the doorbell rang, Harley would lie in his dog bed and bark for one of the other dogs to rush the front door to announce the visitor or dinner delivery. This dog would come when he was called and show up at meal time. That was the extent of his disciplines. He ran our home like a drill sergeant and we willingly fell for his every whim. He was happy being carried around and loved on constantly. We didn’t have favorites but Harley was a remarkable treasure of the heart.
Our smartest rescue dog is a Schnauzer mix. Vincent Star (Vinnie) is addicted to television. His favorite show is “Lucky Dog” and anything on Animal Planet is a strong substitute. If allowed, he’d monopolize the TV with his programming and forfeit PupCorn, his favorite treat, at the instant he hears Brandon McMillon’s voice on Saturday mornings. Vinnie is extremely disciplined and rarely misses a command. His life purpose is to please and be loved. Except for lying on a freshly painted baseboard, I can’t remember any other instance of him being subjected to dog jail. Vinnie is the poster puppy for play, performance and pleasure. Approximately 12 years ago, a neighbor rescued Vinnie from the local animal shelter. The neighbor died 2 weeks later. Instead of returning the 12 week old puppy to the shelter, Vincent became the third Musketeer of our gaggle of dogs.
I read an article in The Dallas Morning News, Sunday, August 5, 2012 in reference to a photographer in Taiwan, making a social statement by photographing dogs immediately before they are euthanized. The article prompted me to write the blog entry, Dogs to advocate for 4 legged furry friends. Again, if you are unable to give a home to one of God’s innocent creatures, please advocate for them.