The blue Olivetti typewriter
Let words fall where they were
supposed to without the inhibitions and tribulations
hanging – dragging
fog
inoffensive
lyrics bounding from the swing reckoned with burnished chain
fresh from Miller Hardware.

The blue Olivetti typewriter
Slammed unkind verses
clicked intense verbiage – the 18k watch wound tight
evidence of the spring snapping befell an uncommon reflex
inside of you.
Should I put it out there? Will everyone know I can’t tell time?
Shifty-Shifty gave it an A

The blue Olivetti typewriter
prospered expressions into an adolescent eminence
I didn’t know that I didn’t know – but it was alright with the ecosphere.
Shunning allocation due to a Hartley on a billboard
It wasn’t created to share venal sequestered contemplations
The assignment had to be presented
The class was paid for with sweat applause rattled the monogrammed oxford shirt pink souls are not for sale (can’t believe I remember using that expression)

The Goodwill doesn’t even want to deal with the shamble of inappropriate technology in a humid southern state.

Electronically transmitted to the back of the closet
©WriteInSpace.com all rights reserved 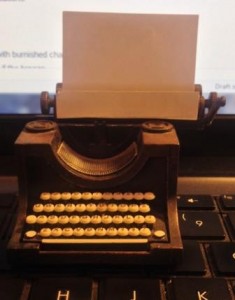