I couldn’t remember the name of an Elton John song that played continuously throughout my entire tenure at my first job in State College, PA. It must’ve been the only song management allowed, liked or would afford. I asked a lifelong friend of mine to assist in helping me to recall this ditty that had my gutchies in such a bunch, so many decades ago.

I told her my mind keeps going to “Alligator Rap:”. She immediately yelled, “Crocodile Rock“. She obviously is aware of my twisted brain wiring,

A common memory trick is to remember important stuff by associating it with a conjoint word or a word starting with the same first letter. Corporate ice-breakers are famous for starting a meeting with introductions such as, Julie/the Jew, Buffy/Big Boobs, Candy/Cake, Pete/Polish, Seymour/See More, Hank/Hawk, on and on. Every friend of my youngest son, has a name beginning with a “J” – Jason, Jacqueline, Jeremy, Jessica, Jacob 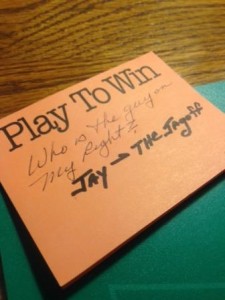 , Jasmine, etc. Hell, no normal person could differentiate that troupe. I called them, “the “J People”. This son’s name is “Joe”. It all seemed appropriate in my head.

Working outside sales also presented the mitzvah of remembering a manifold of names and titles of clients. The use of association to the vertical or market sector sometimes worked but would get jumbled like the “Alligator Rap” did. A CEO, physically small in stature (my purse weighed more than he did) owned a ginormous collection agency. He drove a pick-up truck so huge it exceeded the size of the elementary school building, I attended. It even had a cattle guard on the front. You could fit a scout troop in this thing. His first name was Dick. You figure out how I remembered his name.

These tricks are not always foolproof. While walking around Kennywood Park, in the ‘Burgh,  with my sister, a couple walked up to me with the excitement of a teenager seeing a Beatle in person, and literally engulfed me with enthusiastic accolades of joy. They knew my sister, the names of my children and knew the fact that I had moved to Texas a very long time ago. These people even knew my grandmother! To save face, this is a dangerous tactic, I went along with it. After mysteriously galloping down memory lane with these folks, we escaped to Noah’s Ark. I turned to my sister and asked, “Who the hell were those people?” She said, “Are you shitting me?” I told her, “I never saw those people before in my whole life.” She said, “They were longtime neighbors of yours.” So help me, I don’t have any recollection of knowing them. Usually, you have a brain fart and a week later you slap your forehead or wake up in the middle of the night and say to yourself, “How could I not have recognized them.” The truth of this situation – I still don’t remember those people. Obviously, I made a positive impression on them or they remember my ex-husband sliding sideways down the snow filled driveway and landing in Roy Rogers parking lot after doing a few 180’s.

A negative association experience can also stick with you for a lifetime. Due to a broken sprinkler head, my office in a high rise office building, flooded. My boss called building management and asked for wet vacs to be brought in the help dry the mess up. A few minutes later, an extremely handsome man was standing in front of me with a horrified expression on his face. He asked who called for “Wet Backs” to be brought in here. At the time, I didn’t know or had never heard the expression, “Wet Back”. To this day, every time a wet vac is mentioned, this situation pops into my brain. By the way, I didn’t know it at the time – I would end up marrying the extremely handsome man with the horrified expression seeking clarification for the request made.

©Write In Space – all rights reserved.