Recently, I went to the Lamar County courthouse in Paris, Texas to conduct changes on vehicle titles. I also had a registration that had expired in November 2013. The reason this specific registration had not been updated was due to Haskell Maroney – I take it is the person as the named Lamar County Tax Assessor-Collector, returned my check to me because the bank or credit union does not appear on their list as being “local”.

I asked the “representative” behind the counter, what specifically constitutes a local bank. Said “representative” told me if the bank wasn’t on their list, they could not accept the check. I asked how this policy or rule got instituted. She informed me the county lawyer made the rule because he was unable to collect on bounced out-of-town checks.

I think an attorney who knows how to collect bounced out-of-town checks needs to replace an attorney who does not know how to collect on insufficient out-of-town checks. For pennies per item, the checks can also be validated at the counter from an out sourced system. So, to save this “attorney” from conducting due diligence, the citizens of this county are subjected to being treated like a deadbeat. The assumption is every check not written on a local bank is bad.

If you use a debit or credit card, you are charged an extra percentage above the transaction. Without being privy to their merchant agreements, I don’t know if this percentage exceeds the amount the financial institution is charging. There are not any disclosures displayed at the counters.

Your choices for paying for the vehicle registrations are:

1. Get back into your car, find an ATM and obtain cash to pay the registration transaction.

2. Use your debit or credit card and pay an additional fee.

3. Get back into your car and drive to a bank, listed as a “local bank”, open an account, drive back to the courthouse, and wait to see if the bank is still on the local list and your check is accepted.

One of the title changes I requested was for an antique plate. The original antique plate registration was paid for in March 2013. This plate was good for 5 years. The “representative” told me it was expired. I informed her it was less than a year old and expires in 2018. She told me it was too late, she had already entered into the system to reissue a new one in my name only. The previous owner was my deceased husband. Because she read the expiration date as 2013 instead of 2018, it cost me more money to issue the new antique plate. When I questioned the transaction, I was immediately dismissed, again with “it’s too late, I already put it in the system”. 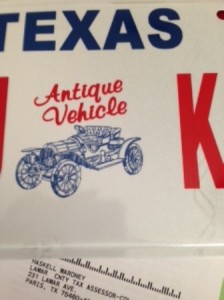 There seemed to be little to no interest in looking at the insurance verification I presented at the window. It makes me wonder who is insured around here and who isn’t.

Word to the wise – don’t change the titles until the registration expires. Know who your elected officials are and what they won’t do when you go to the polls. Mail your “local bank check” to the Lamar County, Texas Tax Assessor/Collector so you don’t feel like a common thief, deadbeat, low life when doing it in person.

Customer service is non-existent when there is no competition. It takes training, common sense and effort to convey respect and “delight” to serve from behind the counter of a public office. Even if the policies were made by someone uneducated in the means to create fair and non-discriminating practices to the majority, the message could be relayed in a professional and positive manner. I’ve goggled this specific office and have found this situation is not new or recent. The solution to the problem is someone speaking up, providing the information necessary to rectify the adverse actions and implementing the personnel willing to practice the golden rule.

I have volunteered at a local food pantry. The clients utilizing the services of the food pantry are treated with higher regard and respect than at the courthouse where we pay all of the salaries.