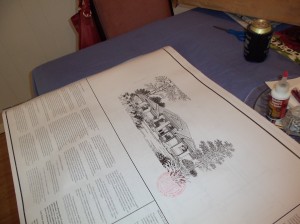 It took a long time to plan the move to the Paris area. Years of fretting over how to leave a city life behind. The decision actually fell into place with frustrating 2 hour commutes, road rage incidents,employment incidents, turning neighborhoods and the world we knew changing – as we changed.

There have been a great number of sacrifices, including leaving the locale of where our grown children live. Reality kicked in full blast with the lack of retail access to items we took for granted. It was beyond comprehension a convenience store would close at 9:00 pm before moving to Northeast Texas. The sidewalks roll up early here. If you want a Hostess fried pie – you’d better get your ass in the car before 8:45 pm.

We tried to buy a house here. It didn’t work for me. We bought our property before we were sure what to even do with it. Countless hours were spent searching the internet and home plan sites. We made the final choice of house plans about 4 times. The size of the house and how much bucks it would take to build it were the most prevalent factors. Sure I could pick out plans for a huge mausoleum but who was going to clean and maintain it. How could we afford a gazillion doors? With a few bottles of wine and endless conversation, we came to the conclusion, this new house would have to take care of us when we are unable to care for ourselves. Just as our first house raised our children and created the suburban dream.

Your house is never truly yours. I always wanted to create a fantasy world in my home. I didn’t want to be like my parents – which were the epitome of “The Wonder Years”. I didn’t want that but that is exactly what we created. We are – what we know. We did keep a bicycle in the vestibule and had huge acrylic abstract paintings on the walls but it was a mainstream house. The new house was initially going to be like an urban modern loft type of joint. Then I realized no one in Paris, Texas would want to purchase it when we truly needed a buyer. The taste of most homeowners in the Northeast Texas area points more toward kikker cowboy western motifs. So, we will be traveling the middle of the road type of hacienda.

The outside will be beautiful garden-variety by the home plans we purchased and will be to the liking of many. We have become minimalist in the sense we are tired of cleaning and packing and kicking around chachkis.  I enjoy them at other people’s homes but not in ours. The interior will be easily switched to unexceptional and standard when we are ready to exit the premises permanently. I am tired of painting everything country white, white-white and beige by all the names – eg: Swiss Coffee. Paint is easy to change.

We’re not going to go crazy and hang the Jeep Scrambler from the ceiling. It will be uncrowded, modern and artsy-fartsy. Less is best. It is not what has been planned, but rather what is disliked, discarded and eliminated. We now know what we don’t want.

The last of the brush and stumps on the house site.

The wood on the lot is actually still smoldering. It smolders slower in the rain. It hasn’t rained here for months until we needed to get ride of a bunch of debris. The extra dirt needs brought in. The next step will be to sit and watch it settle!

We are in need of a truss builder, either on-site or off-site. There are a lack of them listed in the vicinity. Hardly any craftsman have websites. It may be the lack of internet access. Still planning and researching where to find materials and construction experts. There is no sense of urgency among the masses here. I guess they’re waiting for a bigger job to come along – like cousin Eddy.