Yes, I’ve seen snow in Paris, France, but this blog entry is about Paris, Texas. After living south of Houston for a long, long time, seeing snow on the ground was an extremely rare event. Except for an occasional dusting, which usually melted within minutes, snow was non-existent.

I would see snow when traveling. My boss would get mad and ship my skinny butt to Chicago in January. A relative would pass away, always in the winter, in Pennsylvania, during a white out blizzard. Christmas in years past with my brother would always yield some of the white stuff. At home in Sugar Land, TX or Crystal Beach, TX, it was almost a guarantee that snow would not be an issue. This is the reason we have no snow boots, scarves, gallashes, snow tires, mittens, muck-a-lucks, or slickers.

After attending a lovely Christmas party in nearby Oklahoma on Christmas day, flurries began to fly. It was novel and fun to watch them out the window like tiny butterflies. Then the flurries started sticking to the bushes and accumulated on the ground. The ride back to Paris was much like gliding through wonderland. Move slow and steady to avoid any hydroplaning or sliding into a ditch. Folks with bald tires and no common sense don’t ever seem to get it. 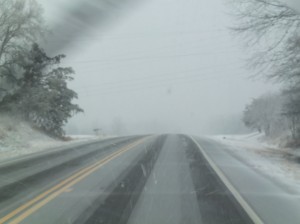 They become constant entertainment during your over the road journey.

My ultimate favorite driver is the one buzzing by at 70 mph and attempting to pass in a lane literally covered with snow and ice. The center median almost instantly becomes their landing strip – if you are lucky and they don’t roll over your vehicle. Just as dangerous, is the driver who can not see out any of their snow or ice-covered windows, the defroster never did function properly and they are crawling at 15 mph. You have angels on your shoulders if you see their white mini Cooper in the white out before driving up their trunk.

Inexperienced drivers either never watch the news, don’t comprehend what they hear on the news or are just plain stupid when they are informed of the dangers with black ice. The sky can be blue with cotton fluffy clouds and the temps have improved to where the inside of your nose does not instantly freeze. These drivers now think they are exempt from black ice syndrome. The Chevy truck I saw yesterday, with his engine in the front seat, may benefit from listening the next time.

This weather is brutal. I am not a fan. It may be time to invest in some electric gutchies because I am worn out from being cold already.