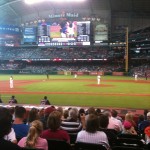 It will not be long before there are ads printed on your toilet paper – both sides. We are so inundated by advertisements. You can’t even say the name of a stadium or ballpark without giving notice to a corporate giant. Minute Maid Park just doesn’t sound sportsy.

The Skeeters, a minor league baseball team, built a magnificent ballpark, Constellation Field,  in Sugar Land, Texas. We attended a ball game during the grand opening weekend. Before entering the park, Wells Fargo had their wagon out front and people were fighting their way to it to get a coin bank, advertising the name of the said financial institution on it. You would’ve thought they were giving away Rolls Royces. The stadium has the perpetual signs around the ball field advertising just about anything you can imagine. The grassy sitting area is sponsored by Krogers! The scoreboard is 65% to

90% advertisement. It takes you a minute to figure out the score because your brain has to bypass State Farm Insurance. I don’t even like mentioning these companies in this article. I can’t remember what team the Skeeters played. I can’t remember any of the ball players names, but I can tell you between innings, some mascot type person ran the bases for State Farm. The game is interrupted with continuous plugs. The Skeeters is a new organization in the business of making a profit under the guise of charity, community and family. It is a fantastic Sugar Land asset and brings bucks to the city.

Don’t tell me advertising is necessary to keep these venues profitable. I attended many games at Forbes Field to watch the Pirates play. As a small kid, five years old, I remember Roberto Clemente and Bill Mazeroski because Rowsey Rowswell wasn’t promoting Schwinn bicycles and Studebakers. He was calling plays, building excitement and and truly was “the voice of the Pirates”. I’ve been told the ball games were memorable because the Pirates won the World Series that year. I did not attend the World Series.  I was afraid of the fireworks. My grandfather with his patience and lots of snacks in a cloth tote bag, took me to almost every game. I even remember the really large black woman with the wooden sign around her neck and a tin cup sitting outside the Forbes Field entrance. I don’t remember being brainwashed by Mellon Bank and Allstate Insurance.

Sport venues are not the exception. The same can be said for cable and satellite television. You actually pay to watch commercials. The receipt at the grocery and drug store is further product advertisement. Junk mail advertisement is killing trees and junking up the kitchen counter. Credit Card statement stuffers are another nuisance. Nursing home residents have emery boards with the name of a funeral home advertisement. Buy a car and the license plate holder is an ad. Vending machines in schools is making a lot of corporations, dentists and doctors wealthy and the kids are paying the cost for obesity, health issues and cavities, to name a few.

There is big bucks in pitching product and service. I don’t mind the online media because it is not dominating the moment. Blocking pop-ups cured that problem. I do glance at the side ads. It presents the new and shiny. I don’t feel suffocated or overwhelmed with sorting it out from the direct focus. I am in business and need advertising. Balance is required to allow performance. One direct, simple and strategic banner conveys more retained information than a conglomerate of mass media enveloping your entire being.

I predict ads will be strategically placed in your panties and boxers so the ads can be read while you’re on the can. Baby strollers will have placards built into the sides and backs. Sidewalks will have electronic banner images flashed onto them. Vehicles are already “wrapped” and clothing is already a walking billboard. Will the exterior of our homes and pets be next? Which theater, organization or sports venue will be sponsored by a hemorrhoid cream, tampon or proctologist in our future?