It is a very long drive from Houston to Powderly, Texas. The entire world changes after the first hundred miles outside of the metro-plex. The skyscrapers and freeways appear to melt in the rear-view mirror. The concrete turns to no man land prairie and fields. And then, all of a sudden there is hardly a billboard and you are stuck with the minute array of radio stations.

Knock me in the head, sideways, but I could swear I heard someone on a station in Crockett, Texas reading the obituaries for the week, on the air. Each obituary, in its entirety, line by line, including pall bearers was relayed. I am still not sure if I view this as blasphemous or having the fear of my obit being read out loud on a radio station. It was the same feeling as finding out you have been wearing your panties inside out all day. Not a good feeling.

I have the steering wheel controls to switch stations. They must have a thousand switches on them now. There was a multitude of religious preaching going on. I could almost tell the size of the church. Bet it was painted white and there were wildflowers in mason jars around the altar. A few of the sermons were quiet and subdued. One particular preacher was yelling. Either the congregation was hard of hearing or no one was there and he was trying hard to reach out to them.

There was a nice surprise being able to zone into NPR contact  for enough time to hear the TED Radio Hour. TED stands for Technology, Entertainment and Design. I love this program. I watch it on the Roku quite often. The episode this Sunday afternoon was, “Where ideas come from”.  Elizabeth Gilbert, the writer of “Eat, Pray, Love“, conveyed her theory on “A new way to think about creativity.” Shortly after Elizabeth’s 18 minutes of eloquence, the station buzzed out. It was like having lost a good friend to hear the static.

During the five and a half hour adventure, I heard the Beatles sing, “I Will“. At his wedding, I danced with our youngest son to that song  The words to this masterpiece was also printed on our sons’ adoption announcements. What would the odds be of hearing this never a top 10 billboard hit on a radio station driving North on Highway 19 in Texas? Immediately following was Frankie Valley and the 4 Seasons.

There was no heavy metal, headbanger, rap,coffeehouse songwriter hits, or classic rock and roll anywhere to be found. I would’ve settled for a few polkas and a couple of ditties from Yoko Ono. An abundance of kikker music and gospel tunes were swiftly switched, some back and forth, out of frustration, through the car speakers.

Small towns do not have budgets sufficient to provide a vast variety of contemporary and up to date programing. Most of it sounds like it is being produced from someone’s back porch. Advertisers cater to large populations. Bigger bang for the buck. Lack of funding is going to dictate availability. I am extremely spoiled with previous access to world-class programming and a gazillion choices. I am not to sure if satellite XM would have been accessible where I was driving. Fortune permitted the sound of any human voice.

I have since learned to sync the IPhone on a regular schedule to have current podcasts and tunes to entertain my soul, no matter where I may be. My own singing gets on my nerves. God forbid, I’d be left to my own solitary thoughts for more than a few minutes. 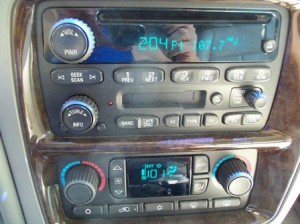